North Dakota, land of deer, farms, and not much else. Jon, Rus, Brian, Tom and I all headed up there for some deer hunting at the Gapp family land there. Jim Gapp was quite generous and invited us all up there for a full week of hunting. It’s a beautiful piece of land located right near Wahalla, ND. 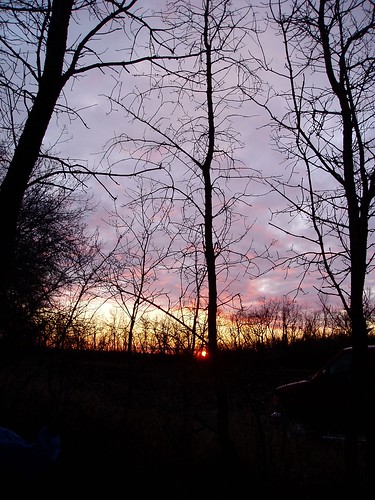 Rifle hunting means wearing orange, which can be seen clearly even in the morning dim. I’d wake at 5:30am to plan where we would hunt that morning and wolf down some oatmeal. Then I’d hike on out to the hunting ground. Usually arriving in the stand by 6:30am, I’d commence the endurance of 20-40 degree temperatures and uncomfortable sitting in tree stands until about 9 or 10am. By that point, eyes are tired from straining to scan all viewable area for any movement, toes and fingers are freezing because the heat packet chemists didn’t know what they were doing, and generally I’d be more than eager to head on up to the hunting shack for some pancakes made on the woodburning stove. 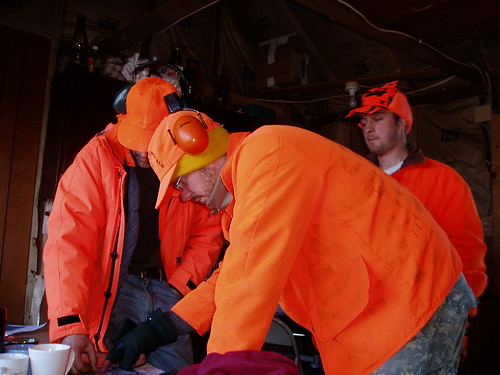 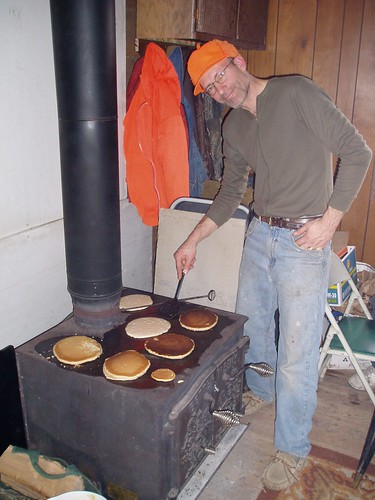 But by the time the evening hunt rolled around at 3pm, I’d forgotten about that all and would be hungry to go at it again. The evening hunt would commence, and we’d all gear up again and head out.

Rus was the first of us five to get a deer. After half-dozing during the Tuesday evening hunt, he awoke to find a deer 75 yards in front of him. Lining up his scope, he got it with a great shot that felled it within 15 yards of where it was hit. 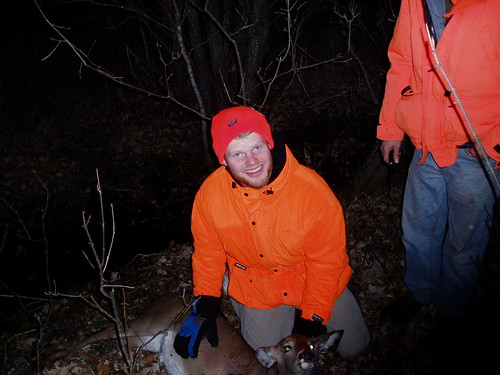 Wednesday went by without much commotion. Thursday after the morning hunt was wrapping up, I walked on over to another field to find two deer scattering from in front of me. So, that afternoon I set up a tree-stand about 10 feet up on the edge of the field to try to see those deer the next morning. Waking of Friday from dreams of hunting, I headed down to that field. As dawn broke and the sun began to rise, I waited and waited for the deer. I spent much of the morning sitting, but then stood to get the blood flowing in my legs at around 8:15am. A few minutes later as I’m contemplating flapjacks and coffee, I scan the field and catch my breath. A big doe, standing on the edge of the woods, is staring right at me. I freeze. It looks around, ears twitching for any sounds. Content with it’s supposed security, it emerges onto the path through the field some 160 yards from my stand. A moment later a smaller doe, a yearling, follows it onto the trail. Two deer! My heart is beating like a humming bird’s as they start heading on the path straight toward my stand.

“Okay,” I tell myself, “Two deer. Get the bigger one Abe. Line up a shot. Wait… don’t move until they put their heads down. One’s down, now the other is… argh, there’s no way I’ll be steady enough to take a good shot while standing. Gotta sit down. Okay… NOW!, while they’re both grazing.”

I sit down and line up a shot through the scope of Jim Grill’s thirty-ought-six with my elbow stabilized by the tree-stand seat.

“Wait for a good shot now Abe. Patience. But wait, I’m upwind of them. If they get to that point in the trail, they may smell me.”

The two does continue down the trail, and are now within 50 yards of me.

“Okay, they’re close enough now. Can’t miss from here. It’s like hitting the broadside of a barn. Any closer they may smell me. Gotta shoot soon… turn deer… turn sideways so I can’t miss.”

The deer slowly turns to face the wood edge, directly perpendicular from me.

“Did I get… YES! YES! It’s stumbling. The big one’s down! Oh man, I’ve been waiting for this all week. Wow. This is awesome.”

With my ears ringing and adrenaline flowing, I now look up to notice that the other deer is still in the field! Surprised to see it still there, I quickly raise my scope and take a look.

“Well, it’s still there… ran about 50 yards back, but still within in good range… I’ve got another tag so…”

“Ahh! Missed. Should’ve taken more time. Stupid. Wait…. it’s still there. It hasn’t moved again. Alright, take your time this time Abe. It’s scared, but it hasn’t seen you yet. Seems to be confused about what just happened to the big one. It’s looking over that way. Okay, gun steady… here we go…”

“Did I get it? I can’t tell. It ran that time, that’s for sure. Gotta go find out… wait, any more deer around… nope, don’t see any. Hmm, should I wait to see if any more come…. No, I can’t take it anymore. I might’ve gotten two deer! Okay, time to get down.”

I get down from the stand, and as I do I notice the semi-automatic had jammed on the last shot. Good thing I didn’t need to take another. When I reach the bottom of my stand, I see Tom Miller has come on over I pump my fist in the air.

He congratulates me, and we head over to check where they went down. Just on the edge of the woods, a few steps from where it was shot the big doe lay, hit square through the lungs. Uff-da though, it was heavy! We drag it onto the field so we can load it in the suburban and take it up to the hunting shack. Then, we go to find the other one, hopefully to see a blood trail. Sure enough, there’s quite a trail right where it was shot at, and it also turned out to have gone down within a few steps of where it was shot. Just a yearling, this one was much lighter and easier to drag out. 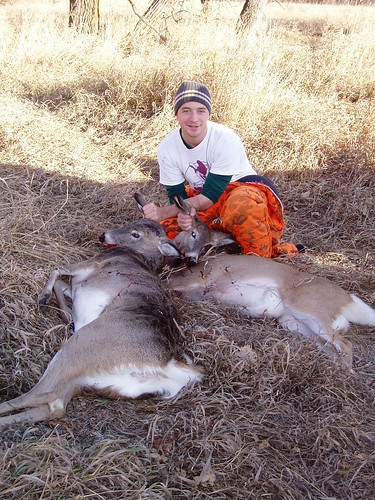 “Well, that set’s the plan for the rest of the day,” Jim Gapp states as Tom and I arrive to tell him about the success. Jim, Rus and I spent six hours that afternoon gutting, skinning and butchering the two deer I got, plus Rus’ and one Jim had shot the day before. Learning the whole process of deer to venison was fun, but it’s certainly not for the squeamish of stomach.

Praise God for Jim Gapp’s generosity, all the hunters who were there, and also for the Father’s graciousness in providing two deer, one of whom wasn’t smart enough to run away when it was shot.